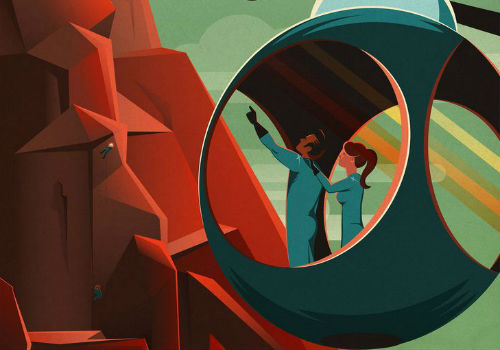 SpaceX is busy flying supply missions to the International Space Station and trying to land and re-use their rockets, but they are also looking to the future. Elon Musk has made no secret of the fact that his ultimate goal for the company is to send people to Mars. Now they’ve created a series of travel posters to get people excited for the idea of packing up and moving to a new planet.

In one, a man and woman gaze through the window of their Martian gondola at Olympus Mons, which the poster reminds you is “the solar system’s highest peak.” (There are people in the background climbing, they aren’t falling to their death as I thought when I first saw the image) In another, a man in a jetpack flies over Valles Marineris — the 2,500-mile-long stretch of canyons that scar the surface of Mars — toward a cliff to meet his family next to some sort of futuristic Airstream. And the third promotes Phobos and Deimos — the two oblong moons of Mars — as off-planet cruise destinations.