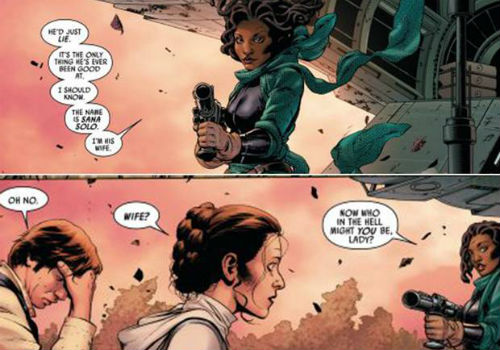 20th Century Fox has released the first trailer for The Martian. Keith Conrad is a fan of the novel and couldn’t be more excited. Elliott Serrano on the other hand is somewhat jaded, since director Ridley Scott has turned in some disappointing movies recently.

There’s been some casting news from the new X-Files revival. Joel McHale has been cast as an Internet talk show host. Elliott thinks this means that clearly Chris Carter is listening to this podcast and is stealing his ideas.

Marvel is releasing a series of comics in the run up to The Force Awakens, that fill in some of the back story of the characters in the original trilogy. In the latest issue, we learned that Han Solo was actually married during the time between A New Hope and The Empire Strikes back. Elliott and Keith discuss how much of a stuck-up, half-witted, scruffy-looking nerf-herder Han would have to be to clearly pursue a relationship with Princess Leia even though he was already married. Elliott also believes that Han repeatedly breaks the Bro Code, but Keith points out that the Bro Code could be completely different in a galaxy far, far away.