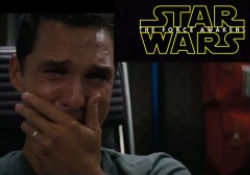 Worldwide productivity came to a crashing halt when the second trailer for the new Star Wars film, The Force Awakens, was released late last week. Naturally, fans quickly got to work spoofing and parodying the short teaser. Director and filmmaker Oskararnarson cut together footage of Matthew McConaughey crying and watching a video from Intersellar to make it appear he was reacting to the new Star Wars trailer.