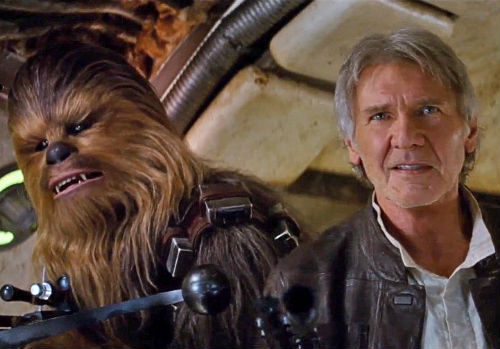 If it seemed all of a sudden productivity came to a grinding halt at about 1pm central time on Thursday, April 16th, 2015 you can blame J.J. Abrams. The new Star Wars head honcho decided that Star Wars Celebration in Anaheim was a good time to release a new trailer for Star Wars Episode VII: The Force Awakens. People ran to the computers, grown men cried. It was a scene both inspiring and a little pathetic.

The trailer (Above) is just about two minutes long and doesn’t do a whole lot to explain the story so there aren’t many spoilers, which is a good thing. We do see that apparently that the Empire and Rebel Alliance have been spending all of the last 30ish years fighting and most of the galaxy appears to be in pretty bad shape. Viewers do get to see a little more of the new main characters in this trailer. There was a voice over from Mark Hamill strongly hinting that one of said main characters is a Skywalker, shots of intense battles and destruction, the Millennium Falcon flying into the wreckage of a crashed Star Destroyer.

Oh yeah, Han Solo and Chewbacca show up at the end. Did I mention that?