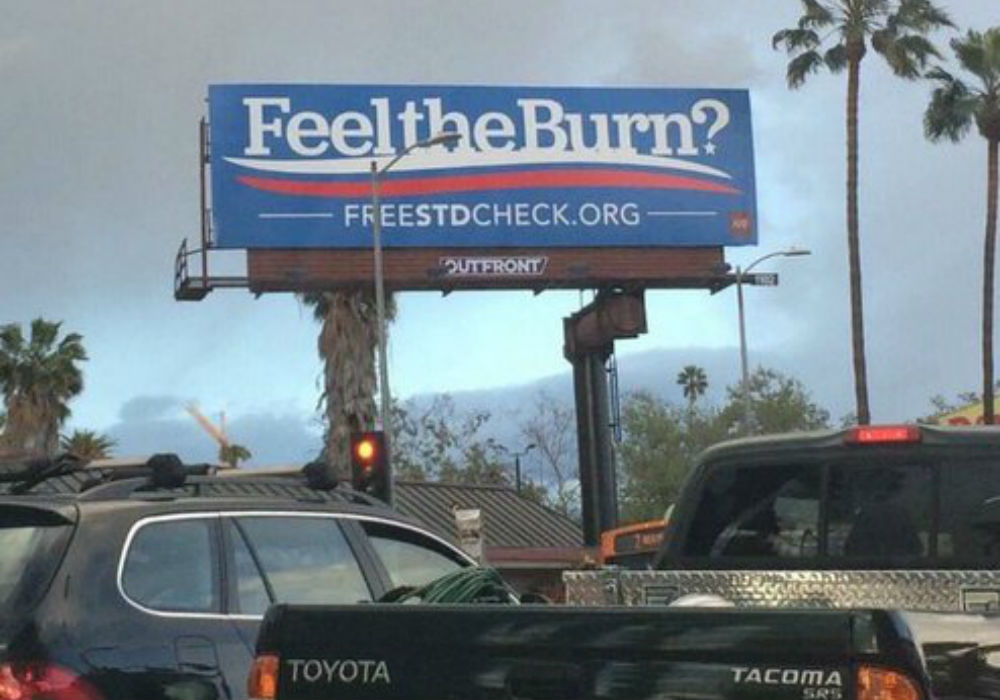 Billboards are popping up all over Los Angeles that say “Feel The Burn.” They aren’t for Bernie Sanders, they are trying to get people tested for STD’s. Feel The Burn, get it? The billboards are from the AIDS Healthcare Foundation. They’d had quite a few tongue-in-cheek billboards recently, and their spokesperson suspects that Bernie Sanders would get a chuckle out of them.

A Mayoral task force here in Chicago is calling for the city to require employers to give workers 5 paid days of sick leave per year. They estimate there are about 200,000 workers in the city of Chicago who don’t have any sick days and can’t afford to take any days off and lose the pay from those days.

Rahm Emanuel wants a federal hate crime investigation into the racial slurs that were heard over Chicago Police radio frequencies. This seems like such a waste of time and energy to me, it’s not like you can completely control who broadcasts on those radio frequencies, and it seems like it would be impossible to find out who did it. So what’s an investigation actually going to prove? There are morons out there, we already know this.

America simply doesn’t want to be made great again: Polls show that a head to head match-up between Donald Trump and Hillary Clinton would be a bit of a bloodbath in electoral votes.

SNL had a pretty epic cold open on Saturday night (live). The focus was on women Trump supporters defending him on cable news.

Meanwhile, Trump is complaining that the RNC is treating him unfairly. He was on Face The Nation and specifically cited Louisiana, where he says he should have gotten more delegates than he did.

The East Coast is going to be a mess on Monday: Due to an accident involving an Amtrak train near Philadelphia, the Northeast Corridor, the busiest area for train travel in the country, has been temporarily shut down. Amtrak said that the train “operating from New York City to Savannah, Ga., struck a backhoe that was on the tracks and derailed the lead engine south of Philadelphia.” There are about 341 passengers on board and two people have died from the crash.

Trash-talking: Scottie Pippen says the 95-96 Chicago Bulls would have swept the current Golden State Warriors. The warriors are closing in on the Bulls record for most regular season wins. He says he would have kept Stephen Curry under 20 points. What if the Warriors and Bulls met up in a street brawl, with Curry armed with a flame-thrower and Pippen had a broadsword?

It wouldn’t be opening day without a mascot controversy. The Cleveland Indians aren’t getting rid of their Chief Wahoo logo, but they’ve decided to dramatically cut back on him. He’s off of their caps, but still on the sleeves of their home uniforms. They won’t be getting rid of him though, despite the fact that some people aren’t too happy with him.

The Secret Service got into a confrontation with protesters outside the White House over the weekend. They objected to the gigantic, 50-foot inflatable joint the pro-pot protesters were carrying with them.